The shiny things have arrived!  I now have: 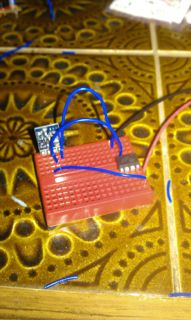 The idea is to mount the accelerometer on the Scalextric car, and use the ATTiny and the RF transmitter to get the readings back to the Uno or my FPGA (or maybe RaspberryPi when they are finally released).  I’ve already got logic and a circuit which allows me to control the power to the car from the FPGA (using a PWM signal).

As a start, I’ve been trying to get a reliable signal from the Tiny to the Uno.  Unfortunately libraries such as VirtualWire don’t work on the Tiny, so I tried going back to basics.  By the end of last night I’d written something to just bang bits out at 2400bps with a preamble but no checksum.  That worked some of the time, but wasn’t very reliable at all (even with both on the same coffee table).

Luckily, a friend is working on a similar sort of project, and he’s got a Manchester encoding library working on the ATTiny85, with a reasonable amount of success.  So I’m going to use that and see if it improves things.