Back from Maplin, I was eager to try out running the accelerometer on the car.

The circuit has now got a little complicated.  I was hoping to draw it out but that will take longer than it took to wire up, so you’ll have to do with a description.

I need two voltages – the 9v battery powers the transmitter, and I use a 1k resistor and 3.3v Zener diode to generate 3.3 volts for the accelerometer and ATTiny. 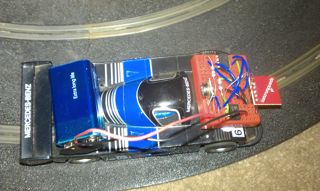 The problems I have now are that transmitting the readings back takes too long – a corner only lasts a few transmits – and I’m still seeing odd bit errors despite the checksum.  I hear that there might be a bug in the Manchester library though, so that could explain that.

Plans going forward (not necessarily in order) are to: